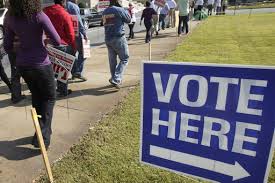 A judge struck down the law last April, 2014, and the law is now in some kind of legal “limbo.”  It is supposedly still in effect, and the state went ahead and enforced the voter ID laws during the Arkansas primaries on Tuesday.

After checking ID, election workers quizzed voters on their personal information, and they used electronic card strip-readers to verify ID.

However, these things apparently go beyond what the law allows.

In addition, large numbers of absentee ballots also are in danger of not being counted.

Apparently, voters are supposed to send ID with absentee ballots, but often that didn’t happen.

The director of the state Board of Election Commissioners Justin Clay said the state’s training program for poll workers had made clear that the law allows them only to verify the name and picture on voters’ ID.

However, the official response in Arkansas has been lackadaisical.

Clay said he had spoken to one county involved, which assured him that it had trained its poll workers correctly. He was asked if there was a plant to investigate further.

“No plan at the moment,” said Clay, adding that unless the board received complaints from voters or from county clerks on voters’ behalf, there wasn’t much it could do.