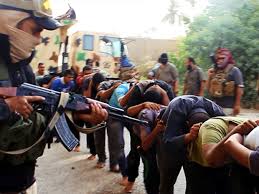 Update:  ISIS declared today that they have established a new state from Diyala Province in Iraq to Aleppo, Syria. The group named Abu Bakr Al-Baghdadi, the leader of ISIS, as its leader.  ISIS also renamed itself “The Islamic State.”

ISIS forces have been fighting in the village of Al-Daira, which lies about 30 miles south of Baghdad and is within sight of Iraq’s main highway.  Iraqi government forces have been sent there to fight the insurgency.

Fierce clashes also took place near the towns of Jurf al-Sakhar, Mahmoudiyah, and al-Rasheed, just south of Baghdad, between the security forces and Sunni militants, including those who are linked to ISIS.

The provinces south of Baghdad are overwhelmingly inhabited by Shiite Arabs, except in a zone around Al-Daira where residents are mostly Sunni.

Sources also state that unlike northern Iraq, where foreign fighters have fought beside Iraqis, these militants were all from Iraq.

Apparently, both sides are now fighting dirty – including the government forces.

Last week, according to four police officers, counter-terrorism officers in the area emptied a prison of men suspected of working with ISIS.  They then proceeded to execute as many as 70 of them.

If the prisoner executions occurred as the officers described, they would qualify as a war crime.

The prison executions were supposedly to avenge executions by ISIS in Takrit earlier this month.

Analysis of satellite images of mass graves back up claims that militants in Iraq massacred at least 160 captives in the northern city of Tikrit, Human Rights Watch has claimed.

In 1944, President Roosevelt had an election campaign while World War II was still raging.

As part of the campaign, he urged voters not to “change horses in mid-stream.”  In other words, “don’t make the situation less stable by electing a new leader while the war is still going on.”

Currently in Iraq, prominent Shiite leaders are pushing for the removal of Prime Minister Nouri al-Maliki.  The parliament is preparing to start work next week on putting together a new government.  It is supposedly being done under intense U.S. pressure.

Iraq is finding itself in the position of being forced to create a more inclusive government at a time of war against radical Sunni Islamic fighters.  ISIS militants are supposedly holding areas 60 to 70 miles outside of Baghdad.

The question is:  would Baghdad be “changing horses in mid-stream?”  Such a large change to the government may not be coming at a good time.  There is an urgent need to fight ISIS and to protect Baghdad.

The president has decided to send 300 military advisers to Iraq who would join up to 275 being positioned in and around Iraq to provide security and support for the U.S. Embassy in Baghdad and other interests.

Obama has also recently sent Congress a $500 million request for a Pentagon-run program that would significantly expand previous covert efforts to arm rebels fighting in Syria.

The move that comes amid increased U.S. concern that the conflicts in Syria and Iraq are becoming an intertwined fight against the same Sunni extremist group.

Obama has long been reluctant to arm the Syrian opposition, in part because of concerns that weapons may fall into extremist hands, a risk that appears to have only heightened now that ISIS has strengthened.

Obama is making a request to Congress that appears to indicate that tackling the crumbling security situation in Syria and Iraq trumps those concerns.

Secretary of State John Kerry met with Syrian opposition leader Ahmad al-Jarba.  Apparently $500 million is not enough.  “We still need greater assistance,” al-Jarba said, speaking through a translator. “We hope for greater cooperation with the U.S.”

Now the U.S. would like moderate rebels in Syria to fight against the government forces of Bashar Assad, and against the extremist rebels (such as ISIS)  in Syria and in Iraq.

Is there a willingness on behalf of “moderate” Sunni rebels to leave Syria and fight in Iraq?  Do they feel Iraq is more important than Syria? Don’t they have enough on their plates?
The moderate fighters and the militant extremists are both Sunni rebels in the war against Assad in Syria.  Can they truly be expected to fight against each other at the same time they are both fighting Assad’s government forces?
Is the area headed for a 3-way civil war?
http://www.bellinghamherald.com/2014/06/27/3721717/obama-seeks-500m-to-arm-select.html

What does the law do?

The law enacts a ban on assault rifles, limits magazine capacity to 10 rounds and creates criminal penalties for gun owners who fail to report stolen firearms to police.

It also establishes a licensing requirement for handgun purchases. Prospective purchasers must undergo a fingerprint background check, take a 4-hour gun safety course and submit an application fee for a license.

The fingerprint background check and the gun safety course are designed to cut down on the number of false-identity purchases or “straw purchases.”

Previously, a way of getting around the background check rules was to ask a friend with a clean record to buy the gun for you.  This is what’s considered a “straw purchase.”

Another way around the law was to buy the gun yourself by falsifying your identity.

There are also mental health provisions included in the law.  For example, those involuntarily committed to mental institutions are barred from owning any regulated firearm and even a shotgun or rifle.

There is currently still another loophole regarding background checks:

Under the law, gun dealers may release guns to buyers after seven days even if the background check has not been completed, unless the dealer has reason to believe the buyer is ineligible.

There is a new bill that would require that a prospective gun owner’s background check be complete before the weapon’s sale, transfer or lease, regardless of how long that takes.

Has there been a backlash against the new laws?

Yes.  Last May, the House Judiciary Committee in Maryland heard testimony on several bills to either alter the conditions of ownership the new laws impose or do away with them altogether, despite opposition from the House and Senate leadership.

The are also court cases pending that are challenging the new law.

This is a re-blog. Syria, Iran ,and Iraq all have Shiite-oriented governments, and are now fighting the same foe – ISIS, affiliated with Sunni-Islam. The American special forces will by default be fighting on the same side as these long-time foes. 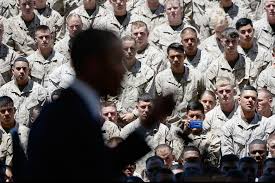 According to the Daily Beast, the U.S. will obtain assurances that the 300 troops being sent to Iraq will have immunity from prosecution.  The immunity granted is based on written promises from Iraq’s foreign ministry that the soldiers will not be tried for actions they are taking in defense of Bagdhad.

“On Monday, the White House spokesman said those promises were provided in an exchange of diplomatic notes. The delay in getting that agreement is one of many reasons why the Pentagon and the White House were reluctant to support air strikes inside Iraq—despite lobbying from Secretary of State John Kerry and his aides.”

“’We remain confident that the military advisers will have the protections they need,’ said Bernadette Meehan, a spokesperson for the National Security Council.  ‘They are going to Iraq with the full support of the Iraqi government. We are working through the mechanism for assurances and we hope to [have it] resolved soon.’”

Also according to the Daily Beast:

“This time around, Obama is willing to accept an agreement from Iraq’s foreign ministry on U.S. forces in Iraq without a vote of Iraq’s parliament.  An official said this would likely be an agreement or exchange of diplomatic notes from the Iraq’s foreign ministry. ‘We basically need a piece of paper from them,’ another U.S. official involved in the negotiations told The Daily Beast. The official didn’t explain why the parliamentary vote, so crucial three years ago, was no longer needed.”

This is a re-blog. According to this, the U.S. has conducted drone strikes in Libya, Iraq, Afghanistan, Pakistan, Yemen, and Somalia.

Over the last five years, the United States has become infamous for our drone assassination program. US drones in Pakistan, Iraq, Afghanistan, Yemen, Syria and Somalia have killed at least 2400 people (and this is almost certainly a dramatic underestimate, as strikes often leave little to identify), many of whom have been confirmed to be civilians.

Armed American drones—aptly referred to as reaper drones—are quick, quiet, and capable of circling unseen for hours until they are ready to launch hellfire missiles at their target. They are controlled from thousands of miles away, thus insulate their pilots from risk, and represent a fully detached method of waging war against an enemy with no way of fighting back.

The Quds Force is a part of the Iranian military.  They are a special forces arm in Iran’s Revolutionary Guards and are responsible for working outside of the country.  As of 2007, their size was estimated at 15,000 troops.

The Quds Force was created during the Iran-Iraq War.  During and after the war, it provided support to the Kurds fighting Saddam Hussein.

The Quds Force also expanded their operations into neighboring Afghanistan, most notably aiding Abdul Ali Mazari’s Shi’a Hezbe Wahdat in the 1980s against the government of Mohammad Najibullah.

In more recent news, Iran dispatched a Quds Force unit already present in Iraq to fight in the city of Tikrit and two Quds battalions to Baghdad and other holy cities of Iraq.

The Quds Force has had involvement in Iraq in the past – unfortunately, against the U.S.

The Pentagon has claimed that Quds Force members were involved in smuggling sophisticated bombs and other weapons into Iraq for use against American troops.

According to U.S. generals, the Quds Force helped plan a January 2007 raid on U.S. troops in the city of Karbala. Four American soldiers were captured in the raid and later killed.

In February 2007, President George W. Bush publicly charged that “the Quds Force, a part of the Iranian government, has provided these sophisticated IEDs [improvised explosive devices] that have harmed our troops” in Iraq.

It has also been suspected that the Quds Force has helped the Taliban in Afghanistan – unfortunately, against the U.S., though Iran has often denied it.

Side note:  Years ago, Quds Force commander Qassim Suleimani was discreetly involved in negotiations with the US after the September 11 attacks, when Iran offered help to US forces in Afghanistan – until George W Bush included Iran in “the axis of evil.”

So the irony and complexity of the situation becomes clear:  if the U.S. sends a large contingent of troops to Iraq and fights with the Maliki government, it will be fighting on the same side as Iran.

While searching for the three missing Israeli boys, the Israel Defense Forces made several discoveries.

They also found a weapons lab.

“We were not surprised. We knew this existed in homes where families live. On the first floor, the family resides, and on the third floor is a weapons production lab,” he added.

Sources claim that some 280 Palestinian prisoners – including 200 Hamas members – have been taken into custody since the start of the kidnapping crisis.

The Mitsubishi i-MiEV is a reasonably-priced electic vehicle which costs anywhere from $23,000 for a base model to $33,0000 for a more luxury model.  Mitsubishi claims it is closer to $15,000 after a federal tax credit.

It will charge in 22 hours using a regular home outlet, but there are other options to speed the charging time.

In Europe, the car is also sold as the Citroen C-Zero