On Sunday, the New York Post stated that the number of cancer cases among 9/11 first responders had more than doubled in the past year.  They went from 1,140 to over 2,500.

The story refers to responders who worked at ground zero after the terrorist attack on the World Trade Center on September 11, 2001.

These are cancers the federal government says are thought to be directly related to that effort, and are cancers like leukemia, myeloma, thyroid and prostate cancers.

There’s a total of 2,509 cases. The center has screened more than 37,000 World Trade Center rescue and recovery workers since 2002. It will continue to monitor those workers and volunteers for any new cases.

Some have argued that hundreds of chemical compounds, among them known carcinogens, were present in the dust surrounding ground zero.

Researchers found firefighters who worked at ground zero were 19% more likely to develop cancer than firefighters who did not. According to the 2011 study, published in The Lancet medical journal, the increase occurred during the first seven years after 9/11. There were subtle increases seen in a few cancers in particular, including gastro-esophageal cancers and blood cancers such as multiple myeloma and non-Hodgkin’s lymphoma.

There are also other health issues.

Both the respiratory and digestive problems are the result of the dust cloud emanating from the disaster site that entered people’s airways, causing inflammation and scarring, and burned its way into the esophagus, the study concluded.

“These people swallowed that very, very caustic dust which . . . was extremely alkaline. It was described as inhaling Drano in powdered form,” Landrigan said.

“The numbers are obviously very impressive but with the exposures to such damaging stimuli, I’m really surprised more people are not suffering,” she said.

But the fact that the respiratory ailments are persisting is a “worrisome sign,” Landrigan said. “It may be the forerunning of chronic lung disease in the future.”

Silvers said that people who haven’t already had symptoms are unlikely to develop them this far out in time, but it’s possible that who have had lingering symptoms might see more problems later on, such as lung or stomach cancer.

These photos show suspected Hamas militants who have been rounded up chain-gang style by Israeli soldiers during the Israel-Gaza conflict.

Following their capture, the suspects were forced to wear blue overalls, before being blindfolded and made to sit in a small enclosure with barbed wire fencing.

Christopher Gunness, a senior director for the UN Relief and Works Agency, broke down and cried during a live television interview with Al Jazeera Arabic.

Taylor Schilling was born on July 27, 1984 (she just had a birthday) is an American actress.

She is best known for portraying Piper Chapman in the Netflix series Orange Is The New Black (2013–present). She made her film debut on Dark Matter (2007), where she starred alongside Meryl Streep.  She has also appeared in other films.

For her role in Orange Is the New Black, she has won the Satellite Award and has been nominated for the Golden Globe Award and the Primetime Emmy Award.

“…Schilling was announced as a contender for Outstanding Lead Actress in a Comedy, the category Mary Tyler Moore has dominated to this day across two iconic sitcoms.”

To top it off, Indywire compares Schilling’s cast members to Tyler Moore’s.

“But would Kate Mulgrew’s scenery-chewing, like Cloris Leachman’s, have felt right without Schilling’s restraint?”

An interesting comparison from Indywire. 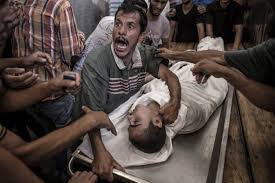 Israeli artillery shells slammed into another U.N.-run school sheltering evacuees from the Gaza conflict early Wednesday morning, killing at least 20 people and wounding dozens of others as they slept, according to Palestinian health officials and the U.N. agency in charge of the school.

The school was at the Jabaliya refugee camp, where 3,300 Palestinians had taken refuge from the fierce fighting in their Gaza neighborhoods

The U.N. Relief and Works Agency (UNRWA), which operated the school-turned-shelter, said the facility in northern Gaza was shelled by Israeli forces and they condemned what it called a serious violation of international law. The Israeli army said it was investigating.

Palestinian health officials said this was the latest in a series of strikes on United Nations facilities that are supposed to be safe zones in the 23-day-old battle against Hamas and other militants.

A group of assailants launched coordinated attacks on government and police buildings in China’s far-western Xinjiang region on Monday, leaving dozens of people dead a day before the mostly Muslim area was set to celebrate the end of Ramadan.

Attackers armed with knives attacked the town of Elixhu, with some later moving on to the town of Huangdi. They smashed at least 30 cars and killed civilians, the official Xinhua News Agency reported on Tuesday. Six more cars were set on fire in “an organized, premeditated and carefully planned terrorist attack of vile nature and tremendous violence.”

‘Police officers at the scene shot dead dozens of members of the mob,’ a brief report from the country’s state-controlled Xinhua news agency said.

Xinjiang, which abuts Central Asia, has long been riven by ethnic tensions between Han Chinese migrants and Xinjiang’s Turkic-speaking, mostly Muslim Uighur ethnic group. Uighurs often complain of religious and economic discrimination at the hands of the Han Chinese majority.

Thanks to The Dish for the video clip.

The report “Palestinian Journalists Caught Between Three Sides” claims the Israeli army doesn’t  hesitate to arrest, even to kill, news professionals.   Journalists are sometimes “caught in the middle” and are threatened by Hamas as well for showing them firing rockets from civilian areas, etc.

Here are some recent events:

On July 22nd, shots were fired at the Gaza Al Jazeera office.

Reporters Without Borders stated 26-year-old Palestinian news cameraman Khaled Hamad, was fatally wounded July 20th as he was preparing a report on attacks by Israeli troops on Palestinian paramedics. Other media workers were wounded in earlier Israeli raids on the offices of news organizations.

He was standing near an ambulance when it was hit by a tank shell and set on fire. Hamad was badly injured but could not be evacuated and died of his wounds several hours later.

On July 20th, the cameraman Kareem al-Tartouri, who worked for Medi 1 TV was injured in an Israeli air raid as he was trying to leave the building containing the offices of the TV station, which had been targeted in an attack. A second missile hit the floor where the station was located, injuring al-Tartouri who was taken to hospital.

On July 18th, Muhammad Shabat, a cameraman for the Watania Media Agency, was injured in an air strike on the Al-Jawhara tower, in which the Watania office is located. The offices of other news organizations in the building were also damaged.

On July 16th, Israeli forces targeted the Daoud building in the al-Rimal neighbourhood of Gaza City, which also houses several news organizations. Two journalists from the Sawt Al-Wattan radio station, Ahmad al-Ajala and Tariq Hamdieh, were injured and taken to hospital. The station was unable to continue broadcasting as a result of the damage.

On July 9th, Hamdi Shehab, a driver for the Media 24 news agency, was killed in an Israeli air raid while he was on his way back to his firm’s office after the Ramadan iftar, the evening fast-breaking meal. He was driving a car marked “TV”.

On July 5th, a team from the Palesting Today TV station came under Israeli army fire while broadcasting live from the scene of confrontations in Al-Tur neighborhood in East Jerusalem. Journalist Ahmed Al-Budeiri was wounded in the shoulder and stomach. His cameraman, Ahmed Jaber was hit in the eye. Technician Walid Matar, suffered a head wound. Meanwhile, Ahmed Al-Khatib, a correspondent for the Hamas station, Al-Aqsa TV was arrested in Tulkarem.

A few days earlier, on July 2nd, a large number of journalists covering demonstrations at Shuafat, following the murder of a young Palestinian were wounded by fire from Israeli security forces.

Tali Mayer, a photographer for the Activestills site and Walla News! was seriously wounded by a sponge-tipped bullet to the face. Her colleague, Oren Ziv, was hit in the arm.

A recent article from Smithsonian.com details the treatment of German Americans during World War I.

Smithsonian states that the German nationality attracted suspicion and anger from nationalistic Americans during World War I.

“In the course of the war, the federal government registered around half a million ‘enemy alien’ civilians, spied on many of them, and sent approximately 6,000 men and a few women to internment camps.”

The article also claims that the federal government seized a huge amount of private property with questionable relevance to the war effort.   The effort ultimately seized assets worth more than half a billion dollars.  That was close to the entire federal budget of pre-war America.

Wikipedia states that President Woodrow Wilson issued two regulations: one on April 6, 1917, and another on November 16, 1917, that imposed restrictions on German-born male residents of the United States over the age of 14.

The rules included natives of Germany who had become citizens of countries other than the U.S.

“Some 250,000 people in that category were required to register at their local post office and to carry their registration card at all times.  They also had to report any change of address or employment. The same regulations and registration requirements were imposed on females on April 18, 1918. Roughly 6,300 German-born aliens were arrested. Thousands were interrogated and investigated.”  A total of 2,048 were incarcerated for the remainder of the war in two camps –  Fort Douglas, Utah, for those west of the Mississippi, and Fort Ogelthorpe, Georgia, for those east of the Mississippi.

Wikipedia also states that unlike the Japanese Americans and Italian Americans who were interned during World War II, German internees have never received an apology.