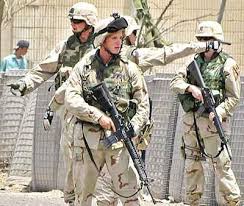 The administration continues to say there are no “boots on the ground” in the conflict in Iraq.  Almost in the same breath, they will say “but we are sending more trainers.”  The trainers are on a combat mission and are receiving combat pay, so aren’t they considered “boots on the ground?”

So how many of them are there?

The Boston Herald claims, “The president has pronounced repeatedly ‘there won’t be U.S. ground troops in Iraq,’ despite the reality that the U.S. has already deployed 1,600 ‘trainers’ and ‘advisers’ to Iraq — who are receiving combat pay.”

Politico:  “Today, many of the advisers, logistics managers and other troops we already have in Iraq—said to be some 1,700 strong, including those guarding U.S. facilities—are already taking part in this new war.”

The Arizona Republic states, “Critics point out that are already more than 1,000 U.S. soldiers redeployed to Iraq to assist the Iraqi military and other local forces fighting ISIS.”

Foreign Policy states,  “Obama said airstrikes, an additional 475 troops – bringing the total to more than 1,600 there – a train-and-advise mission and the resolve of a coalition of the willing will ultimately ‘destroy’ the Islamic State in Iraq and Syria.”

So the figure most often quoted seems to be 1,600 or “more than 1,600” advisers or trainers on the ground in Iraq.