According to Yahoo Singapore, the second day of the international search operation produced scant (or no) evidence of the missing AirAsia flight QZ8501, which departed for Singapore from Surabaya’s Juanda International Airport on Sunday morning and dropped off the radar after about an hour of flight. 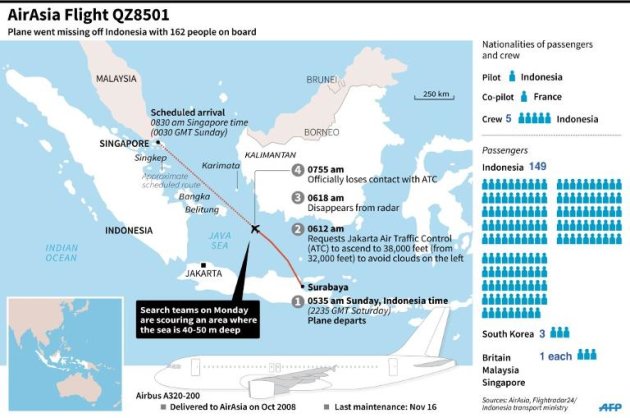 Flight search operations were suspended by about 6:45pm Indonesia time on December 29th, while some 30 ships from Indonesia, Singapore and Malaysia continued searching the Java sea in the northern and eastern parts of Belitung island past dusk.

According to the Huffington Post, the Indonesian Transport Ministry’s air transportation director Joko Muryo Atmodjo said no distress signal had been sent from the plane, adding, “Therefore we cannot assume anything yet.”

“We are coordinating with [the] rescue team and looking for its position. We believe it is somewhere between Tanjung Pandan, a town on Belitung island, and Kalimantan,” he said.

Two more Singapore naval vessels, a landing ship tank and a Singaporean submarine support and rescue vessel, have been given the green light to set sail for the area by authorities.

15 planes from various nations have been searching for the airliner.

On board the missing AirAsia plane were a total of 162 people — 138 adults, 16 children and one infant, making up 155 passengers along with seven crew members (two pilots, four flight attendants and one engineer).

The last communication from the cockpit to air traffic control was a request by one of the pilots to increase altitude from 32,000 feet (9,754 meters) to 38,000 feet (11,582 meters) because of the rough weather.

The U.K. Daily Mail states that the pilot in command, Captain Iriyanto, had a substantial total of 6,100 flying hours and the first officer, Remi Emmanual Plesel, a total of 2,275 flying hours, said AirAsia.

One thought on “Still No Sign Of AirAsia Jet QZ8501”