“What sent me over the top was the church shooting. And my hollow point bullets have the victims’ initials on them.”

Sources say Flanagan’s firearm was legally purchased from a Virginia gun store. It is assumed that his hollow-point bullets were, too.

What are hollow-point bullets?

“A hollow-point bullet is an expanding bullet that has a pit or hollowed out shape in its tip often intended to cause the bullet to expand upon entering a target in order to decrease penetration and disrupt more tissue as it travels through the target. It is also used for controlled penetration, where over-penetration could cause collateral damage (such as on an aircraft). In target shooting, they are used for greater accuracy and reduction of smoke, fouling, and lead vapor exposure, as hollow point bullets have an enclosed base while traditional bullets have an exposed lead base.

“In self-defense, hollow points are designed to increase in diameter once within the target, thus maximizing tissue damage and blood loss or shock, and to remain inside the target, thereby transferring all of the kinetic energy to the target (whereas some fraction would remain in the bullet if it passed through instead).”

In fact, Firstscience TV states that the hollow-point bullet expands to three times the size of a normal (round-nose) bullet.

“Both of these goals are meant to maximize stopping power. Jacketed hollow points (JHPs) or plated hollow points are covered in a coating of harder metal (usually a copper alloy or copper coated steel) to increase bullet strength and to prevent fouling the barrel with lead stripped from the bullet.”

“The FBI switched from 9 mm to .40 caliber after a deadly 1986 shootout in Miami in which the shooters managed to keep fighting after being hit. The FBI is in the process of switching back to 9 mm – though the federal law enforcement agency uses hollow point bullets.”

“Despite the ban on military use, hollow-point bullets are one of the most common types of bullets used by civilians and police, which is due largely to the reduced risk of bystanders being hit by over-penetrating or ricocheted bullets, and the increased speed of incapacitation.” 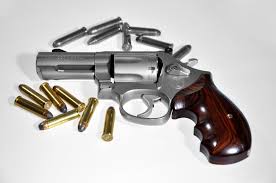