What is One America News Network?

“One America News Network (abbreviated as OAN, commonly referred to as One America News) is an American cable news television channel that is owned by the Herring Networks, Inc. The network is headquartered in San Diego, California, and operates a news bureau in Washington, D.C. Originally envisioned as a conservative news network, OAN’s stated focus is delivering a credible source of national and international news 24/7. OAN also features political analysis programming and political talk shows, along with network special documentary-style reports; its news coverage attempts to maintain objectivity while its political shows illustrate a stronger conservative lean.

Recently, an anchor on One America News gave a lengthy editorial on the Middle East and ISIS.  TYT Network discusses it.

Glenn Beck posted a message on Facebook about the Iran deal and warned of dire consequences, including “a Holocaust, perhaps bigger than the last.”  Beck is currently on medical paid medical leave from his radio show.

Beck wrote how people “mocked him” for warning about the “rise of the caliphate,” but now he’s more convinced that the U.S. has done a deal with a nation that believes in the “end times,” writes MediaITE.

Keep in mind that Sunni ISIS and Shia Muslim Iran are mortal enemies in the Middle East.  They are not on the same side of the war.  Beck:

“For years I have warned the world against turning a blind eye to those who run Iran. They are beyond radical Islamists. They, like ISIS are psychotic Islamists.

“When I predicted the rise of the caliphate, those who had not done their homework on what was really happening in the Middle East spent their time mocking me. Once again, I warn the American people and the people of the world again. This particular strain of Islamists, like ISIS, believe they can “hasten the return of the promised one”, and usher in the literal end times.

“No one in their right mind would sign treaties with a Christian country that believed these things. Remember, it does NOT require you to believe it, just that you fully understand that THEY believe it.

“What this president has done will be remembered as something far worse than Neville Chamberlain. It will only be a matter of time before millions cry out his name in despair and contempt. A Holocaust, perhaps bigger than the last, where millions of Christians and even Muslims who are not Muslim enough will die at the hands of the Islamic State.

“This is a sad day for the right of conscience and the freedom and safety of not only us but the entire world. It is a tragic day for our ally Israel.

“‪#‎neveragainisnow‬. It is time for good, decent and God fearing Americans stand and be counted. This deal yet again proves that our governments are not the solution to our problems. For me, my family and my team we will serve the truth and against injustice no matter the price. We will serve The Lord.

“This must not stand but you must.”

Update: The Times of Israel now puts the number at “over 70” people dead.

A wave of attacks on the Sinai Peninsula in Egypt left at least 38 dead and dozens more injured this morning, writes Gawker.  The attacks were at Egyptian army checkpoints.

The New York Times puts the number of dead at 64 Egyptian troops.

According to the AP, the terrorist group ISIS has already claimed responsibility for the attacks on Facebook.

Also over the weekend, the Egyptian state prosecutor Hisham Barakat was killed at point blank range with a roadside bomb tied to an ISIS group.  The name of the ISIS group is the Sinai Province, writes Gawker.

The morning assault was reportedly launched by around 70 ISIS operatives, who used mortars, rocket-propelled grenades and car bombs in “near simultaneous assaults” on several army checkpoints.

According to the an Associated Press report:

“An Islamic State affiliate in Egypt claimed responsibility for Wednesday’s attacks, saying its fighters targeted a total of 15 army and police positions and staged three suicide bombings, two of which targeted checkpoints and one that hit an officers’ club in the nearby city of el-Arish.

“The authenticity of the claim could not be immediately verified but it was posted on a Facebook page associated with the group.

“Except for the attack at the officers’ club, the rest took place in the town of Sheikh Zuweid and targeted at least six military checkpoints, the officials said. The militants also took soldiers captive and seized weapons and several armored vehicles, they added, speaking on condition of anonymity in line with regulations.”

On June 28, 1919, the Allied leaders signed the Treaty of Versailles, which officially ended World War I, writes Business Insider.

Germany finally paid off its World War I debt in 2010, according to Business Insider and the German magazine Der Spiegel.

That treaty, known as the “unhappy compromise,” had harsh terms laid out in 15 parts and 440 articles. 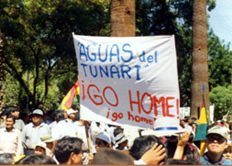 According to NACLA, in April 2000, there was a popular struggle against water privatization in Cochabamba, Bolivia’s third largest city.  It started a series of events that profoundly changed the nation’s political landscape.

Cochabamba’s municipal water company was sold in exchange for debt relief for the Bolivian government as well as new World Bank loans to expand the water system, according to NACLA.

A new law allowed Bechtel to administer water resources that SEMAPA did not even control.  These resources included the communal water systems prevalent in the ever-expanding southern part of the country and in the countryside, which had never been hooked into the grid.

Wikipedia states that tensions erupted when Aguas del Tunari was required to invest in construction of long-envisioned dam (a priority of Mayor Manfred Reyes Villa), so they had dramatically raised water rates. NACLA states there was an average 50% increase in water rates for SEMAPA customers.

The events led to the formation of an alliance of farmers, factory workers, rural and urban water committees, neighborhood organizations, students, and middleclass professionals in opposition to water privatization. They were joined by the militant federation of coca growers, led by then labor leader Evo Morales, who lent his considerable expertise in organizing civic strikes, road blockades, and massive popular assemblies.  Bechtel was forced to end its contract, return SEMAPA to public control, and withdraw its legal claim against the Bolivian government for $50 million in compensation.

There was also a growing demand for popular control of Bolivia’s natural resources, which lead to the Gas Wars of 2003 and 2005, the overthrow of two presidents, and the subsequent election of Evo Morales and the MAS (Movement Towards Socialism) party as a “government of the social movements.”  A second water revolt – this time in the sprawling indigenous city of El Alto – ousted the French multinational Suez company from the recently-privatized La Paz-El Alto water district. (Suez merged with Gaz de France in 2008 to form GDF Suez, which changed its name in April this year to Engie. The water and waste assets of Suez were spun off into a subsidiary, Suez Environnement, writes Wikipedia.)

Bolivia’s new constitution, enacted in 2009, proclaims that access to water is a human right and bans its privatization.

Outside Bolivia, the Water War helped to inspire a worldwide anti-globalization movement and provided a model for water-justice struggles throughout the Americas and beyond. The Bolivian government led the successful drive for UN recognition of water and sanitation as a human right in 2010 and is in the forefront of a new international campaign for a UN declaration against water privatization.

A British teenager is among four suicide bombers alleged to be behind an attack in Iraq on Saturday that killed at least 11 people, illustrating the front-line role foreign fighters from the West are playing in the conflict in Iraq and Syria.

Saturday, the family of 17-year-old Talha Asmal, from Yorkshire in North England, said their son was one of four men that Islamic State supporters alleged were responsible, writes the Wall Street Journal.

In separate news, a senior Kenyan official told The Wall Street Journal on Monday that Kenyan authorities believe another British man, Thomas Evans, had died while fighting for the Somali militant group al-Shabaab.

Authorities are waiting for forensic confirmation that Mr. Evans was among 11 militants and two Kenyan soldiers killed in an al-Shabaab raid on an army base close to the country’s northern border with Somalia, the official said.

A giant mushroom-shaped cloud appeared over the city of Tyumen in south central Russia was spotted and shot by amateur photographers across the area, with images quickly going viral online.  Similar “supercell” thuderstorm clouds appeared near Lubbock, Texas, in April.

There has been no official word on what caused the cloud in Tyumen, writes the Irish Mirror.  The huge cloud stopped motorists on roads around the town, who took pictures. The Irish Mirror reported that the appearance of the mushroom-type cloud generated panic, with social media in a tizzy about whether World War III is starting.

Former Secetary of Defense Donald Rumsfeld said in a recent interview with The Times of London that he disagreed with George W. Bush on one key aspect of the Iraq War.

During the Bush years, Rumsfeld had defended the administration and the decision to go into Iraq, but recently he said that he disagreed with Bush’s idea that it would be possible to bring democracy to the region.

“The idea that we could fashion a democracy in Iraq seemed to me unrealistic. I was concerned about it when I first heard those words,” Rumsfeld told the newspaper, reports Talking Points Memo.

It is unlikely that either Rumsfeld or former Vice President Richard “Dick” Cheney will be prosecuted by the Obama administration for their roles in the Iraq war, states Thom Hartmann writing for truth-out.org.

“And now 40 years after Gerald Ford pardoned Nixon, the precedent has been set that the standing president simply ignores the crimes of his predecessor,” he writes on truth-out.org.

In this episode of The Trews, Russell Brand discusses world leaders’ pledge to end the reliance on fossil fuels and examines Donald Trump’s activities at his golf resort in Aberdeen, Scotland.