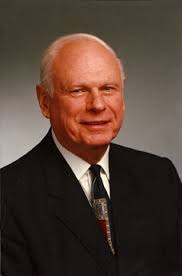 Paul Hellyer was Canada’s youngest Member of Parliament when he was first elected in 1949.  He became Canada’s Minister of National Defense in 1963.  This was a notable period in Hellyer’s career.  As Minister of Defense, he oversaw a drastic and controversial integration and unification of the Canadian Navy, Army, and Air Force into a single organization, the Canadian Forces.

He was in and out of politics for years in some capacity, and in 1997, He formed the Canadian Action Party (CAP).   Hellyer was concerned that both the Progressive Conservative and Liberal parties were embracing globalization, and that the New Democratic Party was no longer able to provide a credible alternative.
In early 2004, Hellyer resigned as CAP leader, but remains a member of the party.

Although he has held high-ranking positions in the government of Canada, he holds some very controversial views – especially those on UFOs.

Below is a video of him giving a speech in Washington, DC at “The Citizen Hearing on Disclosure.”