After six years of intensive research and including 6,750 interviews, Canada’s Truth and Reconciliation Commission decided that Canada’s former policy of forcibly removing aboriginal children from their families for schooling can be described as “cultural genocide.”

The New York Times states the commission published a summary on Tuesday of what will become a multi-volume report.

It will recount widespread physical, cultural and sexual abuse at government-sponsored residential schools that Native, Inuit, aboriginal, and other indigenous children were forced to attend.

The schools, financed by the government but run largely by churches, were in operation for more than a century, from 1883 until the last one closed in 1998.

The commission documented that at least 3,201 students died while attending the schools, many of them because of mistreatment or neglect.  It was the first comprehensive account of such deaths.

The Times writes that the report links the abuses at the schools, which came to broad public attention over the last four decades, to a number of social, health, economic and emotional problems affecting many indigenous Canadians today.

It concluded that although some of the teachers and administrators at the schools were well-intentioned, the overriding motive for the program was economic, and not educational.

Four sailors in the British Navy have been charged with sexual assault during a visit to Nova Scotia, Canada.

“This is a disturbing accusation of sexual assault,” said Lieutenant-Colonel Francis Bolduc, Commanding Officer of the Canadian Forces National Investigation Service in a prepared statement on Friday, according to the Toronto Star.

“Craig Stoner, Darren Smalley, Joshua Finbow and Simon Radford were each charged with one count of sexual assault under the Canadian Criminal Code,” states ctvnews.ca.

“The alleged victim is a young woman and a civilian. Her name is protected by a publication ban,” according to ctvnews.ca.

“I’m pleased with the full co-operation provided by the British authorities to support the hard work and diligence of the CFNIS team in responding to this matter,” Bolduc said, according to the Toronto Star.

The charges reportedly stem from an alleged attack on a civilian woman at a party after a hockey game.

Canadians Angela Collins and Margaret Elizabeth Hanson thought they were opting for a highly educated man with an “impressive health history” when they selected a donor from a U.S.-based sperm bank to start their family, states The Globe And Mail.

However, now the couple is seeking damages for pain, suffering, and financial losses from the company Xytex Corporation in a lawsuit filed in a Georgia court last week.

Years after the birth of their son, the Port Hope, Ontario, the couple learned that they hadn’t been told their donor was a schizophrenic college dropout with a criminal record, the couple claims.

It could become a “class action lawsuit” – the Canadian couple isn’t the only one affected by the situation, according to Hersh.  The suit states the donor appears to have fathered 36 children and Hersh said she had at least 15 other clients who may join the suit.

The Canadian Forces state that social media reports of a possible UFO sighting on February 18th near Jackhead, Manitoba, are not true, according to CBC Broadcasting.  They attributed the bright light people saw to an airplane from a training exercise.

On Wednesday night, several people on Twitter and Facebook reportedly wrote that they saw a bright light in the sky, which fueled speculation that it may have been an unidentified flying object.

Photos were posted of Canadian Forces vehicles in the area, with some people claiming the military was there to contain a UFO crash site.

Lt.-Col. Paul Davies, commanding officer Canadian 38 Territorial Battalion Group, which is involved in an Arctic Response Company Group training exercise on Lake Winnipeg this week, says that it was not a UFO at all.

“I have the commander of that air force contingent sitting right beside me and, you know, he assures us that that was not a UFO, but that was him.”

The bright light that people saw, he explained, came from an airplane that takes off very quickly.

“From a distance it may have looked like it was going straight up in the air, but it wasn’t,” he said. “It was just us out there playing our games.”

A senior police official said that police foiled a plot by two suspects to go to a mall in Halifax, Canada, and kill as many people as they could before committing suicide on Valentine’s Day.  The mall was the Halifax Shopping Centre. One suspect has committed suicide.

The official told The Associated Press on Friday the suspects were on a chat stream and were apparently obsessed with death and had many photos of mass killings. Police and other officials said it was not related to Islamic terrorism.

Lindsay Kantha Souvannarath, 23, of Geneva, Illinois, and Randall Steven Shepherd, 20, of Nova Scotia, were arrested on Friday and charged with conspiracy to commit murder, according to a statement.

A third suspect, 19-year-old James Gamble, killed himself as police moved to arrest him at his home in Nova Scotia.

A fourth – a 17-year-old boy – has been released from custody.

The official said the 23-year-old American woman, was arrested at Halifax’s airport and confessed to the plot. The official said she pre-wrote a number of pronouncements to be tweeted after her death.

Police said the suspects had access to firearms, but did not elaborate.

The official said  the 19-year-old male shot himself to death after police were tipped off about the plot and they surrounded his home. Police saw two people leave the house who they determined were his parents and pulled them over on a traffic check. They then called the suspect. As the man told police that he didn’t have any guns and he was on his way out of the house he shot himself, the official said.

Canadian Politician Ron Liepert complains about renewable energy, but his political district of Calgary has a train powered by wind energy. 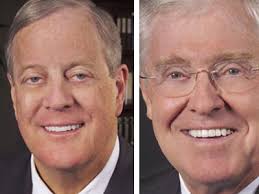 In March, a Washington Post Web article and print article stated that Koch Industries was the largest leaseholder in Canada’s oil sands. That has since been questioned.  However, further reporting has indicated that Koch Industries is the largest American and foreign holder of leases in Canada’s oil sands based on net acreage, but it might narrowly trail two Canadian companies overall.

Below is a list of individual companies’ net acreage lease holdings in oil sands based on data from the Alberta provincial energy department, corporations’ annual information forms, information from a mapping firm called GeoScout, data from a Calgary-based exploration services firm called Divestco Geomatics and interviews with industry analysts and executives:

According to the Washington Post, an oil industry official with direct knowledge of Koch’s lease holdings has said that Koch’s leases in the oil-sands region are “closer to 2 million.” (The official spoke on the condition of anonymity to protect his relationship with the firm.)

This is possible because big companies frequently use brokers or private affiliates to quietly purchase rights without triggering a scramble for nearby acreage. If that is the case, Koch Industries ranks as the largest leaseholder in Alberta.

Koch itself did not reply to questions from the Post about its acreage holdings.

Even without counting possible acreage acquired through brokers or private affiliates, it is clear that Koch Industries through its wholly owned subsidiaries ranks as the largest leaseholder among U.S. or non-Canadian firms and no lower than the third-largest overall.

Figuring out net acreage positions and rankings in the oil-sands region is complex, and a measure of uncertainty is unavoidable.

“It’s so opaque,” said Andrew Leach, a professor at the University of Alberta in Edmonton. “There are so many different layers here.”

The province of Alberta keeps track of designated representatives on oil-sands leases, but the list doesn’t indicate whether those representatives have partners who share the cost of purchase and development. It is a list of gross, not net, lease holdings.

Net ownership could be higher (if a company holds a lot of minority positions in partnerships) or lower (if a designated representative brings in other partners to reduce development costs and spread risks).

Moreover, Canadian government and industry officials note that any company can establish a subsidiary identified only with a number, such as 12345Alberta, and the authoritative industry official says that Koch’s holdings far exceed the acreage listed by name with the Alberta provincial government.

Other oil companies might be doing the same thing, which adds more uncertainty.

The link between Koch and Keystone XL is, however, indirect at best. According to industry sources and provincial government publications, Koch’s oil production in northern Alberta is “negligible.”

Also, Koch has not reserved any space in the Keystone XL pipeline, a process that usually takes place before a pipeline is built.

The pipeline also does not run anywhere near Koch’s refining facilities, and TransCanada, owner of the Keystone routes, says Koch is not expected to be one of the pipeline’s customers.

Still, an activist group that is publicizing the figures about Koch holdings in the oil sands – the International Forum on Globalization (IFG) – is arguing that Koch will benefit indirectly.

The IFG contends that the Keystone XL pipeline will create competition among rail and other pipelines and lower transportation costs for all oil sands producers, bolstering profit margins and making additional reserves economically viable.

A 43-year-old man has been charged after a makeshift bomb ignited but didn’t explode in a hotel lobby Wednesday, police say.

Emergency crews were called to the Courtside Inn around 6:30 p.m. after a guest lit a glass jar filled with liquid and debris before running back to his room, police said.

Firefighters quickly extinguished the fire before it spread to other areas of the hotel.  “There’s minor damage in the office area and there were no injuries,” Staff Sgt. Budd Rung of the regional police said.

Further investigation revealed that “a guest had attended the office area with a makeshift bomb and ignited it before fleeing back to his room,” police said in a release.

“The device did ignite but there was no explosion. The male was arrested in his room, and at the time of his arrest police detected a strong odour of what they believed to be gasoline emanating from the room.”

The suspect was arrested in his room. Police said the room had a strong odor of gasoline.  “With all the fuel, it did have the potential to get out of hand,” chief of fire prevention Brian Dickson said.

Saunders is being treated by Niagara Health Systems and will be held in custody pending a bail hearing. Police did not provide his hometown or address.

According to Right Wing Watch, Richard Mack, a former Arizona sheriff who now heads the Constitutional Sheriffs and Peace Officers Association and religious conservative, said in a recent Blog Talk Radio interview that he believes Cruz is ineligible for the presidency. Mack is known as a prominent “birther.”

In response to a caller who argued that the Constitution bars the Canadian-born Cruz from being president, Mack said, “That is correct, I try to say that to a lot of people. Ted Cruz cannot run for president of the United States.”

Earlier this year, Cruz praised the efforts of Mack and his fellow anti-government protesters in their armed standoff against the federal government at Cliven Bundy’s ranch in Colorado.