The Banqiao dam and Shimantan Reservoir Dam are among 62 dams in Zhumadian, China, that broke catastrophically or were intentionally destroyed on August 8th, 1975, following the collision of Typhoon Nina and a cold front.

The typhoon was blocked for two days before its direction ultimately changed from northeastward to west.  The death toll of this disaster was declassified in 2005.

According to the Hydrology Department of Henan Province, approximately 26,000 people died from flooding.  However, another 145,000 died during subsequent epidemics and famine.  Unofficial estimates of the number of people killed by the disaster have run as high as 230,000 people.

As a result of this near stationary thunderstorm system, more than a year’s rain fell within 24 hours (new records were set, at 189.5 mm rainfall per hour and 1060 mm per day, exceeding the average annual precipitation of about 800 mm), which weather forecasts failed to predict.

It was the worst dam collapse ever.  The People’s Daily claimed the causes of the dam failure were both natural and man-made.  Investigations have also reported that the dam was poorly engineered and constructed making it vulnerable. 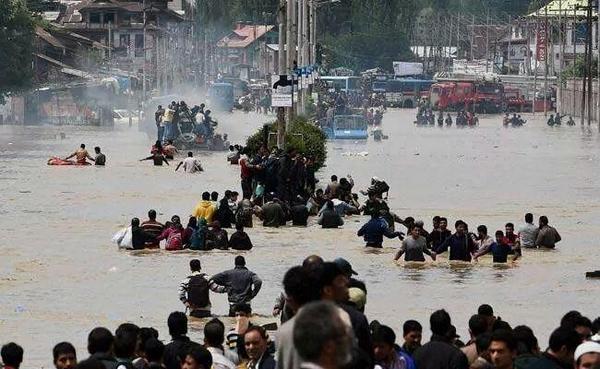 In Indian-administered Kashmir, heavy monsoon rains led to surging floodwaters and the deaths of at least 175 people. Across the disputed border in Pakistani-administered Kashmir, the floods have claimed more than 60 lives, in addition to 131 in Punjab province.  It is the mountainous region’s worst flooding in six decades, submerging hundreds of villages and prompting a crisis that has led to a brief co-operation between India and Pakistan.

Both countries’ armies have rushed to rescue those stranded. Although rain slowed down over the weekend, thousands of people remain trapped in their homes, and there was initial anger at the lack of warning and government preparedness for the floods, which have become an annual phenomenon.

In the Kashmir Valley, people have been stranded in homes, hospitals, hotels and houseboats, at schools and on highways, many going for days without food.

Kashmir is an area divided between India and Pakistan and claimed by both. They have fought three wars, two of them over control of Kashmir, since winning independence from Britain in 1947.  Kashmir has an agrarian economy and there are three main religions in the area: Islam, Hinduism, and Buddhism.  Islam claims the most people.

In recent history, there was an Islamist-led insurgency that broke out in 1989. India gave the army additional authority to end the insurgency under the controversial Armed Forces Special Powers Act (AFSPA). The AFSPA still remains in force in Indian-administered Jammu and Kashmir.

India has been accused of using chemical weapons in the Kashmir area.  In June 1999, military sources within Pakistan alleged that India had launched shells containing chemical weapons at a Pakistani army position on the Line of Control between the two countries.  India has denied the claims.

In the summer of 2010, pro-Pakistan and pro-independence public protests erupted, and clashes with Indian security forces left more than 100 people dead.

Historically, Kashmir became known worldwide when Cashmere wool was exported to other regions and nations.

The Prime Minister of India, Narendra Modi flew to Kashmir on Sunday and promised about $200 million in relief efforts and compensation for the flood victims.

Behind the current floods is the larger reality of climate change, according to Indian environmentalist Sunita Narain.

Both India and Pakistan are struggling with inadequate infrastructure to deal with such natural disasters.  That has been compounded by a monsoon that each year grows more unpredictable and delivers more and more rain.  “This makes for a double whammy,” said Narain.

Apparently, the American “left” are not the only ones who believe in climate change.

Bosnia and Serbia are part of the former Yugoslavia, near the Adriatic Sea in Southeastern Europe.  They are mountainous, with a moderate climate and great cultural history.

The area maintains high literacy, life expectancy, and education levels, and includes major cities like Belgrade and Sarajevo.   The region has also had a huge rise in tourism – projected to have the third highest tourism growth rate in the world between 1995 and 2020.

Earlier this month, over the course of three days, three months’ worth of rain fell on Bosnia, Serbia, and Croatia, which produced the worst floods since rainfall measurements began 120 years ago.

Almost 1 million Bosnians have either been evacuated or have left their homes because of flooding or landslides.

An estimated 50 people have died, with more casualties expected.

The flooded area covers a territory larger than the U.S. state of Massachusetts.

One more problem:  The rains have unearthed and moved many of these land mines, and it is no longer clear where all of them are.   Flood waters triggered more than 3,000 landslides across the Balkans on Sunday – an estimated 2,100 in Bosnia and another 1,000 in Serbia.

The mudslides moved into towns and villages, and they moved the mines and the warning signs that marked them.  Some of the mines are made of plastic and could be moved quite a distance in the water.