According to YNet News, aid agencies struggling to shelter thousands of Gazans made homeless by war have resorted to building makeshift temporary homes out of metal due to Israeli restrictions on imports into the coastal territory.

As of February, around 150,000 families were still homeless after last year’s war between Israel and Hamas.

IDF bombardment destroyed thousands of apartment buildings and homes during the conflict.

“During the 50-day conflict, 9,800 homes were totally destroyed and another 8,000 left uninhabitable, according to data from the Housing Ministry in Gaza,” states arabnews.com.

Israel limits the flow of concrete, cement, iron bars and other materials into Gaza. They are considered “dual use” items that could have a military purpose if they were seized by Hamas to rebuild tunnels used to launch attacks.

According to the BBC, US Secretary of State John Kerry met the chief Palestinian negotiator in London over moves to set a timetable for an end to the Israeli occupation.

The European parliament settled on a compromise resolution recognizing Palestinian statehood and the two-state solution in principle as long as peace talks progress on Wednesday.

Rivaling the Europeans, Kerry was expected to urge the Palestinians not to push for a UN Security Council vote on a draft resolution calling for Israel to leave the occupied territories by November 2016.

A separate draft would set a two-year deadline for a final peace treaty.

Israel looked for reassurance from the US that it would veto both resolutions.

Israeli Prime Minister Benjamin Netanyahu said he saw no reason why Washington would not “stand by its position for the past 47 years that a solution to the conflict will be achieved through negotiations”.

Malala Yousafzai is the youngest person to ever win the Nobel Prize. She also just won money for her human rights advocacy, and she’s giving it all away to help children in Gaza rebuild their schools.

Wikipedia states: “On the afternoon of 9 October 2012, Yousafzai boarded her school bus in the northwest Pakistani district of Swat. A gunman asked for her by name, then pointed a pistol at her and fired three shots. One bullet hit the left side of Yousafzai’s forehead, travelled under her skin through the length of her face, and then went into her shoulder.

“In the days immediately following the attack, she remained unconscious and in critical condition, but later her condition improved enough for her to be sent to the Queen Elizabeth Hospital in Birmingham, England, for intensive rehabilitation.”

Anyone who has been following her story knows that this sort of display of compassion is no surprise.

Just a couple of months ago, the Israel-Hamas war was raging on. They have since declared a truce and disappeared from the headlines.

Now, British Members of Parliament (MPs) are on the verge of backing a historic parliamentary vote that would call on the British government to unilaterally recognize the state of Palestine. Politicians on both sides of the deeply divisive issue believe that the motion will be passed.

The resolution, due to be debated on Monday, also has the support of most Liberal Democrat MPs and a number of Tory backbenchers who have so far been given a free vote on the issue. Government ministers are expected to abstain.

Let’s take a look at a Hannity Segment from July with Russell Brand.

One of the most interesting things about the Israeli-Palestinian conflict in Gaza is that it seems like when the Israelis stop…the war is over.

In a speech to the U.N., Israeli Prime Minister Benjamin Netanyahu refuted claims that his military had committed war crimes during the 50-day war in the Gaza Strip this summer, citing the lengths to which the Israeli Defense Force went to warn civilians to evacuate targeted areas.”

The fighting ended with an Egyptian-brokered cease-fire on Aug. 26.

The U.N. Office for the Coordination of Humanitarian Affairs reports that 2,104 Palestinians were killed in Gaza, including 1,462 civilians, among them 495 children and 253 women. Those U.N. numbers would mean that 69 percent of the total killed were civilians.

The Israeli death toll is at 72 (66 Israeli soldiers and 6 civilians), according to the BBC.

According to Reuters, “the possibility of a war crimes investigation into the conduct of Israeli forces in Gaza…has grown after the Palestinians said this week they wanted to become a party to the International Criminal Court.”

The Palestinians this week unexpectedly said they are just one procedural step away from ICC membership.  The court is located in The Hague, in The Netherlands.

The legal groundwork for such a move was laid in Nov 2012 when the 193-member U.N. General Assembly overwhelmingly approved the de facto recognition of the sovereign state of Palestine by upgrading the Palestinian Authority’s observer status to “non-member state” from “entity.”

A U.N. inquiry has also been launched into human rights violations.

ICC membership would also expose the Palestinians themselves to possible prosecution.

The Guardian states that the power of the ICC prosecutor arises only in two relevant circumstances: first by a reference from the UN security council.  This is sure to be blocked by at least one of the five permanent members – by the US (always protective of Israel), by Russia (afraid of where a criminal investigation of Malaysia Airlines flight MH17 might lead), by China (obsessed with state sovereignty), and even by Britain and France.”

There is also another alternative basis for empowering the ICC prosecutor: a state that has signed up to the ICC treaty may require the prosecutor to investigate international crimes committed by its own people.

Without approval by the UN security council, it could prove difficult to bring a case to the ICC.

According to the AP, A European idea to help end the devastating conflict in Gaza is gaining traction: Develop Gaza’s port to reopen the besieged territory to the rest of the world through a Cypriot port, with international monitors assuring that no weapons get through..

Germany and France have already proposed to re-activate the EU border mission in Rafah with Egypt but there is also a consensus in Europe that the development of the Gaza port should be part of the reconstruction effort, according to EU officials.  They spoke on condition of anonymity because of the precarious nature of the current ceasefire and the uncertainty of the peace process.

1.  Withdrawal of Israeli tanks from the Gaza border.

2.  Freeing all the prisoners that were arrested after the killing of the three youths.

3.  Lifting the siege and opening the border crossings to commerce and people.

4.  Establishing an international seaport and airport which would be under U.N. supervision.

6.   Internationalizing the Rafah Crossing and placing it under the supervision of the U.N. and some Arab nations.

7.  International forces on the borders.

8.   Easing conditions for permits to pray at the Al Aqsa Mosque.

9.   Prohibition on Israeli interference in the “reconciliation agreement.”

10.   Reestablishing an industrial zone and improvements in further economic development in the Gaza Strip.

As is clear, the proposals made by the Europeans relate to number 3 “Lifting the siege and opening the border crossings to commerce and people,”  and number 4, “Establishing an international seaport and airport which would be under U.N. supervision.”  The actions may also relate to numbers 5, 6, and 7 and 10.

A temporary cease-fire between Israel and Palestinian factions in Gaza entered its third and final day on Thursday, as delegations from both sides continued to negotiate a more permanent truce in Cairo.

Israel has agreed to extend the 72-hour break in fighting under its current terms, as per an interim deal brokered by Egypt, an Israeli official said on Wednesday. Hamas, however, stated that no agreement has been reached on an extension, adding that it will consider resuming fire on Israel if its demands aren’t met.

Nearly 1,900 Palestinians and 67 Israelis have died in the most recent conflict.

These photos of children in Gaza are actually less graphic and show milder injuries compared to others on the internet. 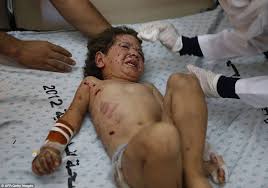 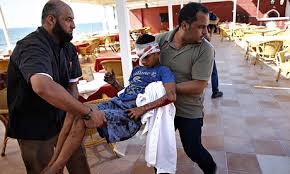 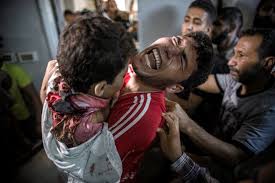 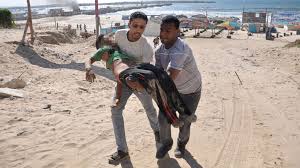 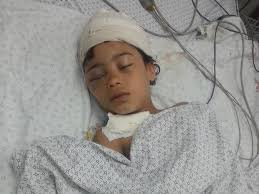 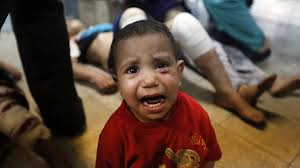 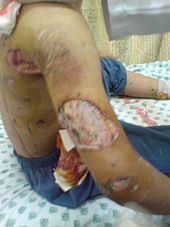 Al-Jazeera states Israeli forces have killed 264 children in Gaza and injured more than 2,000.