The pair are expected to discuss boosting trade ties and possibly dumping the US dollar, switching to their national currencies for bilateral trade.

One of the biggest deals on the table is a multi-billion euro arms deal, and while there, Putin gave the Egyptian president a Kalashnikov rifle as a gift. 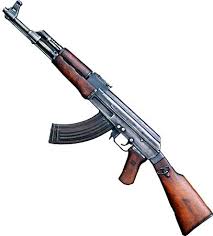 The Obama administration banned imports of rifles from Kalashnikov Concern, including AK-47 assault rifles, as part of sanctions against Russia. The announcement of the sanctions was made in mid-July.

A US dealer specializing in the weapon has sold out.

The Atlantic Firearms company in Maryland had shipped hundreds of the weapons as buyers wiped out inventories across the United States.

It is still possible to import AK-47s made in former Soviet bloc countries like Poland or Romania, or even to buy models produced in the United States. But the Russian-made weapons, designed for the Red Army by Mikhail Kalashnikov, are considered “the classic” by gun aficionados.

The AK-47 buying frenzy presents yet another example of the risk that trying to limit gun sales could create a boom in demand.

“The great irony here is that the threat of regulation has the perverse effect of stimulating sales, and not just by a little,” said Philip Cook, a Duke University gun researcher and author of The Gun Debate: What Everyone Needs to Know. “You have millions of extra sales.”

Stephen Teret, a public health expert at Johns Hopkins University who studies firearms says, “This is a way for guns to move from the licit to illicit markets.

In a lengthy message to members after the Obama administration’s announcement, the NRA’s legislative organization said: “We of course recognize the important role that enacting sanctions can have in furthering legitimate U.S. foreign policy interests. However, in this instance the extent to which these actions coincide with the stated domestic policy goals of gun control supporters is more than a little unsettling.”

Four days after the NRA’s statement, The Truth About Guns, a popular firearms blog, proclaimed the AK-47 “buying panic begins,” adding, “Once again, the firearms industry owes President Obama a debt of gratitude.”

The Obama administration banned imports of rifles from Kalashnikov Concern, including AK-47 assault rifles, as part of sanctions against Russia. The sanctions are due to Russia’s role in the Ukrainian conflict, although many gun enthusiasts/preppers/survivalists believe it is Obama’s secret plot to ban the guns.  Video by Russia Today (RT).