Jerry Kenney is the host of America’s Survival TV, which is apparently a right-wing blog and website with videos.   In this video, host Jerry Kenney said he “doesn’t believe in gay people.”  Kenney and Peter LaBarbera argue that if homosexuality is natural, then so is rape and poison.

Mr. Greste and two colleagues were arrested in 2013. They were convicted of spreading false news and aiding the banned Muslim Brotherhood.

The jailing of the journalists sparked an international outcry.

The three al-Jazeera journalists were arrested in 2013, after the military toppled the Muslim Brotherhood government, led by President Mohammed Morsi.

The men were convicted in 2014 of aiding the Brotherhood, which had been banned by Mr Morsi’s successor, President Abdul Fattah al-Sisi.

Mr. Fahmy and Mr. Greste were sentenced to seven years in prison and Mr Mohamed to 10. Their convictions were overturned on January 1st, but the men remained in custody pending a retrial.  All the defendants denied the charges against them and said their trial was a sham. 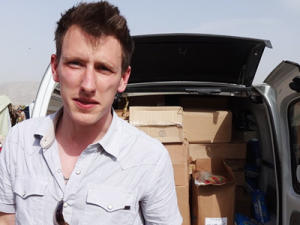 According to McClatchyDC, the different nature of ISIS’ new video has caused some to think that Peter Kassig put up a fight prior to the beheading.  In the newest ISIS video, Kassig does not speak to the camera at all:  in fact, he’s already dead.

A former roommate of Kassig says the unusual nature of the video suggests the 26-year-old fought his execution.

In the video released Sunday, a head believed to be Kassig’s is shown during a 15-minute video boasting of ISIS’ killings of Syrian soldiers. But Kassig’s body and videotaped killing are not in the video. Also not shown are images of other hostages that the group typically sets up as their next victims.

“Peter, who fought against the Muslims in Iraq while serving as a soldier under the American army, doesn’t have much to say,” the masked militant who seems to be “Jihadi John” from the other videos.

“Clearly something went wrong,” Mitchell Prothero, Iraq correspondent for McClatchy, who shared an apartment with Kassig in Beirut. “My belief is that he knew it was up and did something to screw up their video.”

Kassig, an Indianapolis native, was kidnapped while delivering relief supplies to refugees in Syria in 2013.

Prothero believes the hostage training that Kassig would have received when he was deployed in Iraq helped him resist starring in the terror group’s latest production.

For anyone who saw this video and has seen the previous videos, it makes sense.  In the others, the prisoner talked to the camera prior to the beheading.

The ISIS videos of Kassig and of the Syrian fighters can be seen at this website:

The website is called LeakSource.  The viewer must enter a birth date to watch.

Warning:  The videos are graphic and not for children.