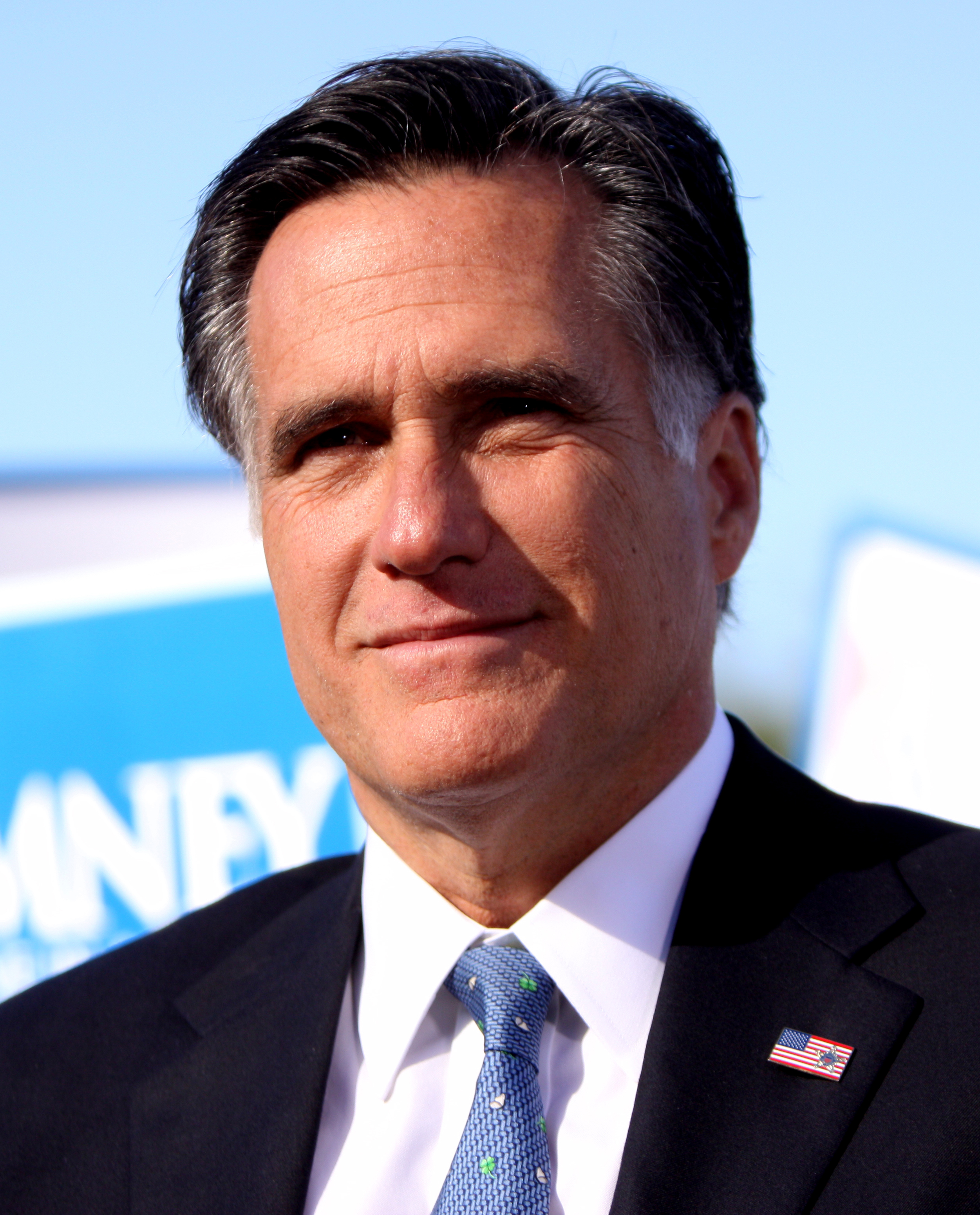 The Las Vegas Review-Journal has an article out that asks:  “Is Hillary Clinton the Democrats’ Mitt Romney?”  Politico and a website called The American Prospect have articles out about “the GOP’s plan to turn Hillary into Mitt Romney.”

The websites shine a light on the issue that Hillary may seem inevitable, but that may not necessarily be the case.

Hillary Clinton officially announced her candidacy for president Sunday, and received praise and backlash from both sides of the political spectrum.

Because of her huge profile and the lack of other well-known Democrats in the field, the former first lady, Senator, and Secretary of State enters the race in a position that is perhaps unmatched in modern U.S. presidential politics.

However,her path has similarities to a past presidential candidate: Mitt Romney.

1. They were repeat runners

2. They were popular with the public

Huffington Post’s pollster shows a recent declining trend in Hillary’s popularity, but overall, she’s been favorable since 2009. Clinton resonated with female voters in 2012, as well as those Democrats with Bill still fresh in their minds.  Various polls showed Romney as the favorite in 2012.

3. They had opposition within their own party

Progressives are unsure of Clinton’s positions on “a litany of current policy issues,” according to Al Jazeera English.

“…(O)n so many important society-shaping issues we don’t know where she stands and we have a suspicion that she’d rather not say,” Roger Hickey, co-director of the progressive Campaign for America’s Future said.

While Romney resonated with the GOP for being a “by-the-books Republican,” members of the party who disliked him did so more for personality, not policy, states the Review-Journal.

Romney’s “aloofness” and “elitism”put off Democrats as well as Republicans. Romney in his second campaign tripped over a line of gaffes and past controversies along the way, states the Review-Journal.

When it came down to the wire, the way Romney handled himself had become an issue for voters.  That “aloofness” created a discepancy between who Romney actually was and who he wanted the public to know in his campaign, states the Review-Jornal.

Toward the end of his campaign he became known to some degree for his wealth and Mormon faith.  Where very few outright hated him — they simply never found him completely trustworthy, state the Review-Journal.

That same lack of trust is the polarizing issue Clinton faces as she enters the race for the 2016 election.

“It raises a huge character issue for me. It goes to whether I can literally trust her,” said Leake Little, a 54-year-old Democrat and poll respondent.

After a recent email scandal, an April 10 Bloomberg poll found that 53 percent agree she purposely withheld or deleted some, with 29 percent saying she was truthful. One-fourth of Democrats agreed to the former.

An Issue for Republicans and those in the middle may be the death of four Americans in Benghazi in 2012, though Clinton was exonerated from any culpability in the most recent investigation, conducted by the Republican-led House Intelligence Committee.  There is currently yet another investigation underway being led by Trey Gowdy in the House of Representatives.

According to nymag.com, as the economy moves into growth, the Republican Party finds itself awkwardly retreating from years of doom-saying and into weariness. The Republican party concedes that things have gotten better, but everybody knew it would happen. “Mitt Romney knew the day would come when a president would be able to swagger into the House Chamber and lay claim to a burgeoning economic recovery,” writes Jon Ward.

Ward’s evidence for Romney’s insight into the inevitable recovery is a statement the Republican candidate made:

“His policies have not helped create jobs.  They’ve depressed them, and this I can tell you about where President Obama would take America.  His plan to put taxes on small businesses won’t not add jobs. It will eliminate them. …”

Romney felt that he was the only man that could bring economic growth to the country.  How confident was Romney that Obama’s job-killing policies would prevent the economy from recovering? Apparently, he was 100 percent confident:

“…and his trillion dollar deficits, they slow our economy, restrain employment, and cause wages to stall.  To the majority of Americans who now believe the future will not be better than the past, I can guarantee you this — if Barack Obama is reelected, you will be right.”

Romney guaranteed the economy would get worse. The point is that the Republican analysis held, as a matter of certainty, that the Obama economic program (stimulus, higher taxes on the rich, health care, clean energy, etc.) would make a strong recovery impossible.

That analysis does not seem to be real.

Theoretically, it could be a good situation for New Jersey Governor Chris Christie, if he didn’t have so many troubles at home.

Those include investigations into purposely causing a multi-day traffic jam in the town of a mayor he didn’t like, misuse of Hurricane Sandy relief aid, and improper use of bondholders’ funds by the Port Authority. “The Boston Globe explored Romney’s post-2012 real estate boom earlier this week, including a look at that house, all 11,206 square feet of it in La Jolla, Calif. It’s a beautiful property, in a beautiful location, that we would not begrudge anyone for owning — although if that owner then started railing against income inequality, we might then raise one eyebrow, just a bit.”

According to Politico, Sens. Ted Cruz of Texas, Rand Paul of Kentucky and Marco Rubio of Florida offered an early glimpse of the GOP presidential primary debates at a forum Sunday in front of hundreds of donors affiliated with the Koch network.

They mainly focused their economic attacks on President Barack Obama while showcasing their own differences on foreign policy.

The three 2016 Republican presidential contenders laid out their arguments on issues such as the minimum wage, income inequality, tax reform and relations with Cuba at a resort in Palm Springs, California during the American Recovery Policy Forum, which was organized by Freedom Partners Chamber of Commerce.

The group oversees the political operation created by the billionaire industrialist megadonors Charles and David Koch.

The forum was moderated by ABC’s Jonathan Karl and was part of the annual winter meeting of the Kochs’ political operation. It was live-streamed to the media, giving the public a first-time peek into the usually secretive event.

Chron.com:  “Cruz and his rivals, seated in couches and free from the clamor of a presidential debate, discussed Cuba policy, the need for a minimum wage and the successes and failures of Mitt Romney in a low-key back-and-forth in California. The trio sparred a bit over the need for the GOP to address income inequality, with Cruz saying it remained obvious that the widening gap demanded attention.”

The Washington Post:  “The panel, moderated by ABC News Chief White House Correspondent Jonathan Karl, took place at a private meeting of wealthy donors hosted by Freedom Partners, a tax-exempt group that serves as the hub of a political network supported by Charles and David Koch and other conservative financiers. In a first, the organization shared a live Web stream of the event with news organizations.”

Oddly, Senate Majority leader Mitch McConnell seemed to shut down the debate on the Keystone XL and wrap up business in order to make time for the Koch meeting in California.

CNN claims that Romney may decide whether to run for president within two weeks.

Mitt Romney is preparing to run for president for a third time.

The day before Romney announced he may run, The Wall Street Journal said:

“For Republicans circling the 2016 race, the focus on struggling segments of the population is a response of sorts to the 2012 contest, when the party’s nominee, former Massachusetts Gov. Mitt Romney , struggled to present himself as an empathetic figure. Many Republicans considering bids this time seem set on forging a new path, one that stays true to conservative beliefs but with a firmer eye on seeking potential solutions to address Americans’ continued frustration with the economy.”

TYT: “…if he is looking for one that could appeal to the middle class and the poor, there are plenty of ideas out there.”

According to a CBS News poll, more Republicans want Mitt Romney to run for president than any other Republican candidate.

The poll has 59 percent of Republicans in favor of the former Massachusetts governor launching a campaign, while 26 percent would rather see him sit out.  That was more than any other Republican contender, including Jeb Bush.  Only 50 percent of Republicans would like to see Bush run.  The poll was conducted among 1,001 Americans nationwide.