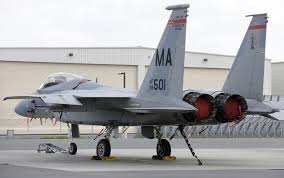 In a previous article, OK, Fine noted that the F-15 is an expensive jet to maintain.  The U.S. fleet of F-15s is also getting older, and many of the planes are now over 30 years old.

What are some recent events with the F-15?

On October 8th, a USAF F-15 with the 493rd Fighter Squadron based out of Lakenheath, England, crashed 38 miles away at Lincolnshire, England.

On August 27th, an F-15 with the 104th Fighter Wing of the Massachusetts Air National Guard crashed near Deerfield, Virginia.

On April 24th, an F-15 made an emergency landing in Lithuania.

On April 7th, a Boeing 737 passenger plane and three U.S. F-15s had a “near miss” above Montrose, in Scotland.

On March, 25th, an F-15 made an emergency landing at PDX airport in Porland, Oregon.

On March 4th, a U.S. F-15 made an emergency landing at Kadena Air Base in Japan.

Loren Thompson, head of the Lexington Institute and a Pentagon consultant, said part of the reason for the problems with the F-15 is “corrosion, metal fatigue and parts obsolescence.”

Recently, the pentagon decided to cut the 65th Aggressor Squadron, the United States Air Force F-15 unit that mimics enemy fighters like the Russian Su-27.  This squadron was used for training, playing the adversary role in dogfights.

The reason was the cost.  According to Time Magazine, the cost per flight-hour for some military jets is gigantic.  The F-15 costs roughly $41,921 per flight hour. (This includes fuel and maintenance costs.)

Some European fighter jets like the SAAB JAS 39 Gripen have costs closer to that of the F-16.

The A-10 Warthog costs $17,716 per flight hour.  (It is also the subject of a budget battle at the Pentagon and may be cut to help fund the new F-35 Joint Strike fighter.)

Smaller drones like the Predator and Reaper drones cost $4000 or $5000 per flight-hour.

These costs do not include the costs of the bombs and ammunition.